Get ready to put on your "Perspectacles"! Register now for the 2022 RhPAP Rural Community Conference

A group from East Central Alberta is showing their support for rural health-care workers, stitch by stitch, during the COVID-19 pandemic.

Members from the Czar Quilters Guild volunteered to sew cotton drawstring bags so local health-care workers could safely transport their dirty scrubs home for washing after their shifts, says president Carol Penman, who lives on a farm near Czar, about 150 km southeast of Camrose.

In just nine days, some members and a few other contributors managed to create 280 bags to donate to the Provost Health Centre, Consort Hospital and Care Centre, and the Points West Living Wainwright – a seniors’ housing complex. Some Wainwright members, who also belong to other area quilting groups, sewed an additional 160 bags for staff at the Wainwright Health Centre.

“It was so funny how excited [the guild members] seemed; it’s so good,” says Penman, noting it was a voluntary call out to members who wanted to participate.

“The big thing is they are doing something for someone else. That’s just so important, and that always makes everyone feel better if they can help.”

The guild members, who range in age from 53 to 90 years, typically meet in Czar twice a month; however, provincially mandated restrictions currently prevent the group from holding their regular gatherings, where they normally spend five or six hours working on individual or charity projects and meeting up with familiar faces.

“It’s actually sometimes more of a support group than anything else, and social time. People are really going to be missing this,” says Penman of the informal setting.

The suggestion for the scrubs bags came from Penman’s daughter-in-law, Darci Penman, after seeing the concept on a Facebook health-care group. The pattern that the Czar guild recommends originates from a Claresholm shop, Willow Creek Quilts.

“It really gave a group of people [who] are now at home self-isolating, … something to do and made them feel like they’re contributing to help with the effort,” says Darci, who works as a registered nurse at the Provost Health Centre. “It’s wonderful that we get to reap the benefits of their talents.”

Alberta Health Services recently mandated that all health-care staff change into street clothes after their shifts to avoid the possible spread of the coronavirus to their families at home, she says. Staff are responsible for laundering their own scrubs since Provost is a smaller hospital with a total of 62 acute and long-term beds.

“When the nurse or the housekeeper, or whoever, takes their uniform off at the end of the shift, they can put them directly into the bag which is sitting in a clean place in their locker room, and then they take that bag home and throw it in the wash,” says Lana Clark, site manager at the Provost Health Centre.

Clark says she had never heard of the scrubs bag concept before, but staff are embracing the idea after receiving the first delivery of the colourful bags.

For Darci, the scrubs bags symbolize the giving spirit of the greater community in which she lives and works.

“When you live in a rural area, I feel like you’re closer to the community.” 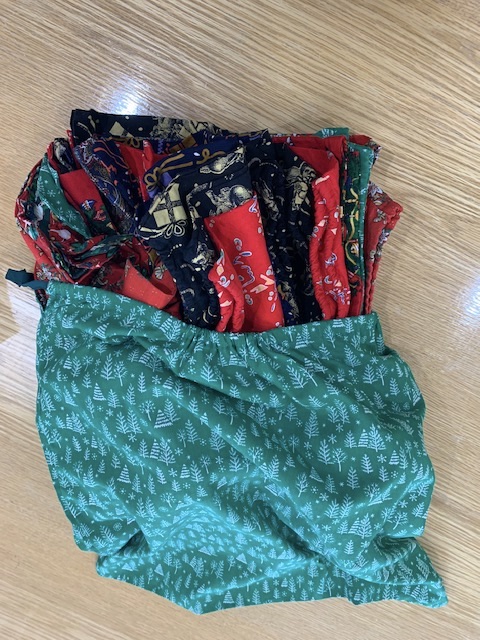 A Claresholm quilting shop is receiving requests from around the world for its pattern to make scrubs bags for health-care providers.

Just over two weeks ago, Nancy Blezy’s daughter came to her with a question. A registered nurse (RN), she asked if her mom could make a bag large enough to carry her dirty scrubs and a sweatshirt home after finishing her shift on one of the COVID-19 floors of Rockyview General Hospital in Calgary. “[S]he wanted something that could be opened and dropped into the washing machine and cleaned alongside her scrubs with minimal handling to reduce any transmission of the virus in her home,” wrote Blezy in an email response.

Blezy owns Willow Creek Quilts in Claresholm, along with her husband Mike, and friends Doug and Hayley Whelpton.

“I made a bag that afternoon and sent her a picture at work and posted it on Facebook. She loved it. Her co-workers wanted one, too,” Blezy wrote. “Others seeing the post — quilters, sewers, [and] even those who had no sewing ability — wanted to get involved, and in this very practical way, show appreciation, support, and encouragement to our incredible front-line health-care workers.”

In response, Blezy added a free downloadable pattern to the store’s website: www.willowcreekquilts.ca.

“It quickly became overwhelming,” she says, noting the pattern has since been requested from people across Canada, the United Kingdom, the United States, Australia, and several other countries.

In the meantime, an RN in Tofield started a Facebook page called “Scrubs Bags for Alberta Healthcare Workers.”

“This site was to connect people in each of the [Alberta Health Services] zones — connecting those making bags with health-care workers who were willing to be contacts for their facility and help safely distribute one of these free bags to their co-workers,” she notes.

Blezy says the site now has more than 1,200 members and she estimates several thousand bags have been distributed across the province.

“Recipients have been overwhelmed at the outpouring and practical support in the midst of this pandemic,” she says. “Those sewing are thrilled to be involved [and] to be able to do something.”

“Making these bags has sure perked me up … thanks from an 85-year-old lady shut in her condo,” one scrubs bag maker shared on a post.

Blezy says many include heartfelt notes of appreciation, from some as young as eight years old.

“I believe this project has given [the] general public an opportunity to help, to do something … it’s a long, loud round of grateful applause for [caregivers].”

Did you enjoy this article?

Subscribe to the Rural Health Beat to get a positive article about rural health delivered to your inbox each week.