Dr. John O’Connor is passionate about caring for indigenous communities in Northern Alberta

As his name would suggest, Dr. John O’Connor is from Ireland. He grew up and went to medical school there and did his internship in a remote area of Northern Ireland.

In 1984, he came to Canada, where he started practising as a physician, covering absences for other doctors in rural Nova Scotia. Ten years later, Dr. O’Connor took over a medical practice in Fort McMurray that included providing care to three indigenous communities.

It took about a year to earn the trust of the elders in the Indigenous communities he served, but it marked the beginning of the most gratifying part of his career.

“It was incredibly rewarding. You felt you were making a difference to people’s lives.”

People need to realize that working in a rural area is not scary and, if you truly want to experience rural medicine, it is incredibly rewarding. – Dr. John O’Connor

Soon those Indigenous communities felt so comfortable with Dr. O’Connor that they played jokes on him.

“A patient in Janvier [said to me] ‘you know, they’ve given you your Indian name and it’s ‘dene yeh cho,’ which means Little Big Man,” recounts Dr. O’Connor.

“I had no reason to disbelieve. I felt quite [pleased] at that. Anyway, I did some research afterwards. … He was [being] tongue–in–cheek, and I didn’t realize it.  It meant something completely different: small, bald guy.”

In 2001, Dr. O’Connor added Fort Chipewyan to the Indigenous communities he served. Not long after arriving, he became alarmed by what he was seeing.

“[A high] number of patients that were coming in and presenting with symptoms and I would refer them for tests and get the results back. [The number of patients] with cancers and autoimmune diseases [was alarming].”

Fort Chipewyan is located next to Lake Athabasca near the mouth of the Athabasca River. Elders were worried that the upstream oil sands industry was having a negative impact on their health. They trusted Dr. O’Conner to be an advocate for their concerns.

He appeared in a documentary titled “Downstream” that explored the effects that the oil sands were having on the environment in Fort Chipewyan.

“The end result was that this [documentary] highlighted [and] intensified the spotlight on a part of Alberta, and connected the plight of Indigenous communities with North America and beyond when it comes to resource management,” says Dr. O’Connor.

In appreciation for all that he has done for their community, the residents of Fort Chipewyan gave him a quilt filled with heartfelt messages from many of his patients. Seeing it still brings a tear of joy to his eye. 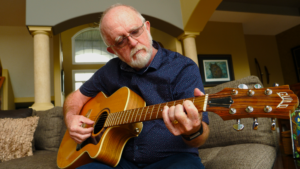 Today, he practises as a hospitalist at the Fort McMurray Hospital, offers care at a homeless drop-in centre, and provides primary care to the Indigenous community of Fort McKay.

He hopes to find more time in the future to play guitar, enjoy his nine grandchildren, and continues to be  an advocate for rural health to up-and-coming physicians.

“People need to realize that working in a rural area is not scary and, if you truly want to experience rural medicine, it is incredibly rewarding.”

Cover photo: Dr. John O’Connor and his wife, Charlene, a registered nurse who often works alongside her husband, go for a stroll in their neighbourhood.